NOW THE WEST HAS ONE 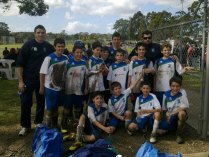 I find myself thinking about what makes things successful a lot these days.

At a very basic level, the old fashioned advice of ‘fish where there are fish’ always rings true. In other words, you wouldn’t set up a boat shop at Thredbo and expect business to flourish would you? The same logic would compel you to set up a boat shop in a relatively affluent area, preferably near the water and in a location that your potential customer base would know you’re in business. Right?

Well it is this same logic that has had me bemused for 7 years or so. With about 20% of the registered players that play football in this country all doing so in what we call Greater Western Sydney, it would seem a no-brainer to have had a club based out here from day one. We didn’t have one and yet many of us embraced Frank Lowy’s words on the eve of the Hyundai A-League and supported the new national competition. Many of us attended Sydney FC matches (an 80 – 100km round trip for some) in HAL 1 to watch a World Cup winning player Pierre Littbarski coach a team featuring the charismatic Dwight Yorke and mercurial ‘local boy’ Steve Corica win the inaugural championship. Despite a tumultuous off season, we returned in HAL 2 to watch the team defend the championship only to be disillusioned by a negative and dour experience. Ultimately, the lack of community spirit and not feeling like you actually belonged killed the initial enthusiasm.

Despite Sydney FC’s efforts, many WestSydnians just didn’t feel part of the club. After all, it was a bloody long way to travel to support our ‘local’ club. This is something non-Sydney based fans can’t quite grasp and see a new West Sydney club as Sydney’s second team. It obviously is by definition, but in many ways, it’s just like a brand new territory. In fact, it is almost as far and takes a heck of a lot longer to get to the outer edges of GWS (Penrith or Campbelltown) from Alliance Stadium than it does to get to Gosford from the same location.

This is just one of the many reasons why this new entity in football’s heartland (no apologies for using this terminology at all – it’s true) will not cannibalise Sydney FC support. In fact, all ingredients are in place to ensure it will be nourished and as a consequence of a natural tribal rivalry (East/North vs West/South) make both clubs stronger.

However, we must also take heed of words of reason. David Zdrilic is right when he says that the maxim ‘build it and they will come’ does not apply to West Sydney. If anyone thinks that simply plonking a team out here without genuine community collaboration will work is kidding themselves. To avoid this becoming the most embarrassing failure in Australian sporting history, the FFA must ensure a thorough understanding of WestSydnians. Unfortunately, there is no template to ensure success out here; especially in football. There are thousands of disenfranchised former NSL fans who will be hardest to convert. Many will stay away never to forgive the execution of their club from the top tier. I know a lot of these people. Some are close friends and in reality, I don’t think will ever truly embrace the new Western Sydney Hyundai A-League entity. Then there are people like me and my family who will support a Western Sydney football club because we feel a sense of belonging and pride. And then there will be those non-committed fans who watch NRL and possibly AFL on television, attend the occasional big match and only have a passing interest in the EPL because they hear work mates talking about how Liverpool lost again (it hurts me to even write that) or that brilliant little bloke called Leo Messi.

These fans are barometers. The ones that will help us understand if the club is boring or unwelcoming, or even fresh and exciting. There are so many more of them than us so we should not alienate them. Also remember that it is very likely that their kids are one of the 90,000 that play football out here, so I see no point in insulting them by calling the NRL ‘thugby’ or AFL ‘aerial ping pong’ etc… They should be considered potential customers and it is time our sport gets that massive chip off our shoulders and tries to get them to sample and ultimately embrace our game beyond Qantas Socceroos matches.

There is a concern that we won’t get a chance to ‘crave’ for the team’s debut as per the three year journey the AFL gave the GWS Giants (although in fairness – they had zero base to start from so needed every minute). It is only 6 months or so before the new season kicks off so the anticipation and satisfaction of learning new things about the club will and must happen very quickly.

This must all happen over the next 6 months so there will be no ‘eager anticipation’. It will all be unveiled with a blur as if we’re hitting the fast forward button to get to the car chase scene in a movie.

Obviously, Western Sydney is football’s most lucrative (potential) market in the country but it will take real understanding, hard efforts, delicate diplomacy and a pinch of pizzazz on the park to extract the gold. I am convinced that the football fans of Western Sydney need their team playing the way we all want football played – beautifully and successfully. This team cannot be a head down – ass up, run all day and bang it in the mixer when you get to that white line style of play. To expect WestSydnians to embrace anything other than beautiful football would be suicidal.

We’re in the entertainment industry. I don’t believe we are actually competing with NRL and AFL. They are winter sports and the Hyundai A-League is predominantly a summer competition so I believe that their fans can absolutely also be our fans. Why not? I like to watch a bit of NRL and AFL as well. I even took my youngest kid to watch GWS Giants kick off their story at ANZ Stadium a couple of weeks ago. I do however believe that we’re in combat for the entertainment dollar against Cinemas, Social Clubs, Pubs, V8 Supercars, Restaurants, Picnics, Beach, Backyard BBQs and even TV. There are many choices to spend the entertainment dollar so it is important to build that emotional connection ASAP in order to make football in West Sydney one of the top choices for the public.

This is a very exciting announcement for people who love football in Western Sydney. Kids have already started talking about it. As players are signed, perform, attend junior clinics, perform again, sign autographs and eventually become heroes to young players, that is when the foundations of a club take root and young fans are embraced emotionally. Unlike the AFL and NRL, our future heroes don’t have the benefit of feasting on Free To Air TV. Accordingly, ours take longer to grow so we have to understand the importance of this and be in it for the long haul.

For almost a decade, we’ve watched the Qantas Socceroos take on the world with more than a generous representation from our part of the world. Schwarzer, Okon, Cahill, Culina, Kewell, Emerton, Popovic, Kalac and many more all from Western Sydney. We’d point at the players in the Hyundai A-League plying their trade across the league all from Western Sydney; Thwaite, Brosque, Antonis, Carle and many more. We’d tweet away with pride at where they started from and bleat with a hint of injustice that they’re ‘our boys’. We’ve watched them play as kids at our local parks, grow up and take on the best and flourish. These players, in a strange way were representing us. Well the bleating and whining and carry on is now over. NOW THE WEST HAS ONE… our very own club in the top flight of football in the country – Hyundai A-League

Error: Twitter did not respond. Please wait a few minutes and refresh this page.