Let this sink in…

Donald Trump is the next President of the United State of America.

By virtue of the influence that the USA has on our world, this is the most important news event of 2016 and beyond. Despite having no input into the election of American Presidents every four years, the rest of the world is deeply engaged in the process because the ultimate selection has such far reaching effects. Let that sink in… really sink in.

In democratic countries, the people decide who governs based on the policies of political parties. The leaders of political parties are not just figureheads and it used to be accepted knowledge that if a leader is considered unelectable, they simply don’t progress to lead a party. If internal party circumstances see one slip through the cracks, they certainly don’t get elected. Donald Trump has unequivocally proven that that thinking is now obsolete and his election will change campaign strategies forever.

There’s no doubt that the global trend is against globalism and an increasing number of isolationist and populist politicians are the rage around the world. Historians will undoubtedly map this point in history to some other notable event in the past. Likewise, there will be another point in the future that will directly link to the election of Donald Trump as POTUS. Let that sink in… 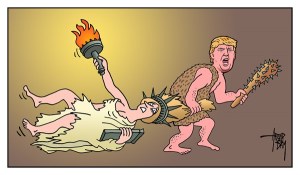 Populist movements always have an ideological romanticism to them. ‘We The People’ are ‘taking back our country’ or ‘regaining control of government’. It’s always about rewinding the clock back to better days when all was good in the world. The ‘good old days’ is a mythical place that people look at with unrealistic nostalgia because as Bono once sang “you glorify the past when the future dries up”. Irrespectively, it is clear that many people are deeply unhappy with their circumstances in life and wanted change and did not care who gave it to them.

Success must often pay homage to ‘circumstances’ and ‘timing’. Donald Trump was in the right place at the right time; running against the right opponent with the right message that middle America wanted to hear – right now. His simple message to America promised everything would great again if they put him in charge. Jobs would come streaming back, terrorism would disappear and America would once again be as strong, prosperous and safe as it was in the ‘good old days’ as long as he, and only he, was elected. Identifying the ‘establishment’ as the enemy was the engine that drove the campaign whilst having Hillary as the opponent constantly reminded the voters about how the ‘establishment’ had let them down. As a consequence, Hillary continually provided the fuel and validation to ‘drain the swamp’. Hindsight shows that this tactic was a masterstroke.

However, alongside ‘circumstances’ and ‘timing’, Trump’s success may also have a more sinister element to thank. His love of publicity means that his pre-political comments and actions are on public record. Trump left nobody in any doubt that he was being anyone other than Donald Trump during the campaign with rhetoric littered with racial and religious bigotry, misogyny, violence, ignorance, media censorship and narcissism. These traits did not disqualify his candidacy to half of American voters; in fact it actually attracted the support of previously underground supremacist groups who felt empowered and validated in their bigotry.

The utopia presented of an America under the Presidency of Donald Trump prevailed. A majority of Americans (based on the Electoral College Votes) simply did not care about his many and varied imperfections so the nation went rogue and elected Trump to the highest political office in the world. The list below is only a small fraction of the documented Trump controversies and proves that in 2016… nobody is unelectable

1. Referred to Mexican immigrants as rapists, drug traffickers
2. Wants the military to commit war crimes, including torture
3. Said not paying income taxes “makes me smart”
4. Wants a database system to track Muslims
5. Said women should be punished for having abortions
6. Urged supporters to beat up protesters at his rallies
7. Mocked a reporter’s physical disability
8. Called poor people “morons”
9. Promised to deport citizens whose parents immigrated illegally
10. Called for a ban on Muslims entering the U.S.A.
11. Described global warming as a hoax perpetrated by ‘the Chinese’
12. Said, “When you’re a star, [women] let you do it. You can do anything. … Grab them by the pussy.”
13. Said veterans who suffer from PTSD aren’t “strong” and “can’t handle it”
14. Referred to a Hispanic Miss Universe as “Miss Housekeeping” and “Miss Piggy”
15. Repeatedly walked in on pageant contestants, including teenagers, while they were changing
16. Happy to be linked to avowed white supremacists
17. Said that supporters who attacked a Hispanic man were ‘very passionate’ and ‘love their country’
18. Blamed sexual assault in the military on “putting men and women together”
19. Claimed he saw thousands of Muslims in New Jersey celebrating the 9/11 attacks
20. Called an attorney who requested a break to pump breast milk ‘disgusting’
21. Barred reporters from campaign events for unfavourable coverage
22. Bragged about the size of his penis during a primary debate
23. Said that husbands who change diapers are ‘acting like the wife’
24. Paid campaign money to family members and his own businesses
25. Speculated about his 1-year-old daughter’s future breasts
26. Quoted in a 1991 book as telling a colleague that “laziness is a trait in blacks”
27. Said U.S. military should withdraw from Japan & South Korea and allow them to defend themselves with nuclear weapons
28. Called for the construction of a wall across the U.S.-Mexico border to prevent immigration
29. Reportedly asked national security advisers why the U.S. can’t use nuclear weapons
30. Told a female staff not to take lunch orders when visitors came to Trump Tower because she was insufficiently attractive
31. Included the head of the white nationalist American Freedom Party on a list of California delegates
32. Compared his ‘sacrifices’ as a businessman with those of parents whose son was killed in war
33. Filed for corporate bankruptcy four times
34. Took out ads alleging that “Mohawk Indian criminal activity is well documented” to fight competition for his casinos
35. Pre-emptively questioned the legitimacy of the election
36. Pretended to be his own publicist
37. Called Russia’s 2014 invasion of Ukraine ‘so smart’
38. Said he doesn’t have the time to read books
39. Joked about 2nd Amendment advocates shooting his opponent or her judicial appointees
40. Repeatedly called a deaf actress “retarded”
41. Launched at least 15 business ventures that went on to fail
42. Said women who are sexually harassed at work should “find another career”
43. Told two 14-year-old girls, “Wow! Just think—in a couple of years, I’ll be dating you.”
44. Hired the editor of white-nationalist website Breitbart as his campaign chief
45. Called on Russia to hack Hillary Clinton’s emails
46. Ejected a baby from a rally
47. Said he wanted to hit Democratic National Convention speakers who criticised him
48. Screwed over the USA Freedom Kids, a group of preteen girls who performed at Trump events
49. Accepted $150,000 in 9/11 recovery funds to “repair” a building that wasn’t damaged in the attacks
50. Said of a 10-year-old girl, “I am going to be dating her in 10 years. Can you believe it?”

Based on the above list and the fact that Trump’s party now has control of all legislative houses plus the Supreme Court, the world can only hope that the Founding Fathers of the United State of America had the foresight to ensure appropriate checks and balances were incorporated within the revered U.S. constitution. Strap in for the ride… who knows where we’re going over the next 4 years.

Check out the reference link below, which includes 180 more points and accompanying documented proof to all claims: http://www.slate.com/articles/news_and_politics/cover_story/2016/07/donald_trump_is_unfit_to_be_president_here_are_141_reasons_why.html

Error: Twitter did not respond. Please wait a few minutes and refresh this page.